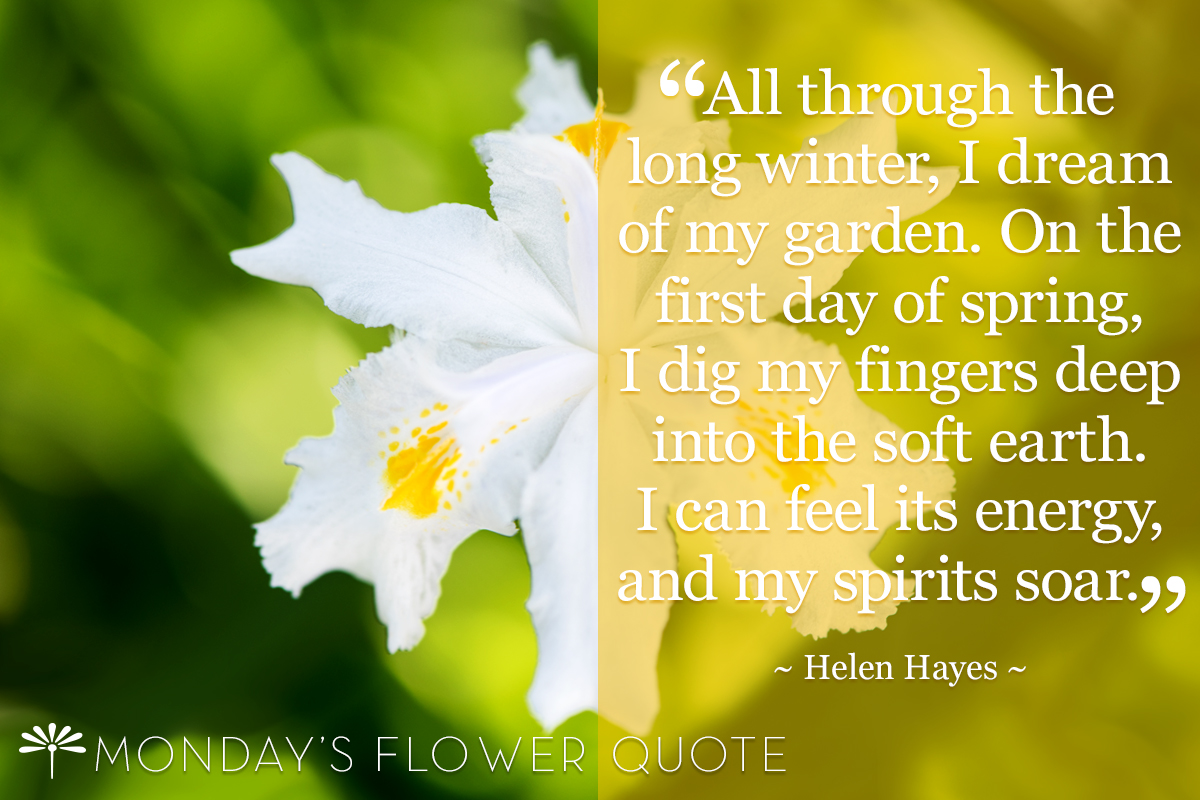 MY TWO CENTS
All through the long winter, I dream of my garden. On the first day of spring, I dig my fingers deep into the soft earth. I can feel its energy, and my spirits soar…I have a feeling with the cold, snowy weather of late, that I will not be able to dig my fingers into the earth as it won’t be so soft. But I will look forward to the next day, close thereafter, to be able to do so. It creates such joy to think about being able to play in the dirt and garden again.

ABOUT THE AUTHOR
Helen Hayes MacArthur (October 10, 1900 – March 17, 1993) was born in Washington, DC to to Catherine Estelle and Francis van Arnum Brown. Her mother was an aspiring actress. Hayes herself started acting at the age of five. She is one twelve who have won an EGOT: an Emmy, a Grammy, an Oscar, and a Tony Award. That is a major accomplishment! In addition, she wrote three memoirs: A Gift of Joy, On Reflection, and My Life in Three Acts. Hayes was married to Charles MacArthur. They had a daughter, Mary, who was also an aspiring actress, though she died at an early age of 19 due to polio. She had an adopted son, James, who was an actor. They had the opportunity to act together in both Hawaii Five-O and The Love Boat.

Besides her family, it sound like Hayes’s next greatest joy was philanthropy. She was involved, to name a few, with the Riverside Shakespeare Company, The Girl Scouts of the USA and was a board member of the Helen Hayes Hospital for physical rehabilitation. To my surprise, she also founded, with Lady Bird Johnson, the Lady Bird Johnson Wildflower Center in Austin, Texas. I guess she really did dig her fingers into the soft earth on the first day of spring. I’m personally not sure how she did it all, but she sure accomplished a lot!

Need moments in your week just for you, to connect to nature and bring the beauty of flowers into your view? Sign up to be a Floating Petals member for FREE and experience the 400,000+ flowers that petal our world.