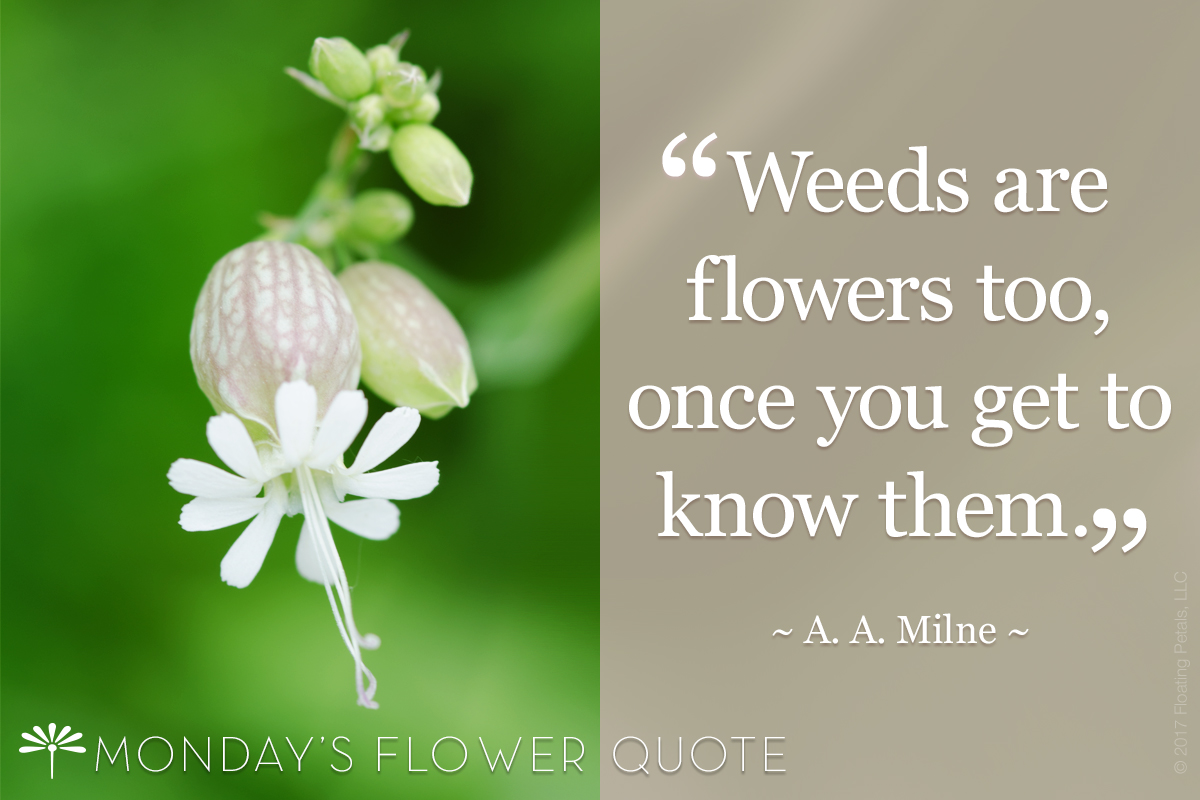 If I was given a multiple choice question with four different options, I think I would have been able to guess who wrote this quote as it has the perspective of none other than Winnie the Pooh.

MY TWO CENTS
Weeds are flowers too, once you get to know them… If we only took the time to get to know what or who we thought were weeds, we would have a lot more flowers to surround us and a much more beautiful world.

ABOUT THE AUTHOR
A. A.* Milne (January 18, 1882-January 31, 1956) was a noted author and playwright. He received his B.A. in Mathematics. He collaborated with his brother, and they wrote for the student magazine, Granta. Milne’s writing became known and the British humor magazine Punch took him on as a writer and assistant editor. He joined the military during World War I and reached the rank of lieutenant. After the war, he married Dorothy de Sélincourt in 1913 and in 1920 they had their only son, Christopher Robin Milne, who became the inspiration for one of my most beloved books and characters, Winnie the Pooh. I love the stories and Winnie the Pooh so much that we named our dog (who has now passed on) Winnie. The light-hearted Winnie the Pooh always makes my heart smile, just as our Winnie did.

I found it interesting to read that A.A. Milne became annoyed by the success of Christopher Robin and Winnie, as those stories mean so much to me. For him though, he wanted to be an author who could write in any manner he chose and probably felt very pigeoned-holed by those who so loved his children’s books. I know he added to this world in a most wonderful and innocent way, and I thank him for what he gave to me.

*I always wanted to know what the ‘A. A.’ stood for: Alan Alexander*.

FEATURED FLOWER
Common Name: Bladder Companion. Latin Name: Silene Vulgaris. Photographed in Dorset, Vermont along the roadside. One of my favorite places to look for ‘flowers’ as there always seems to be a surprise.

4 thoughts on “FLOWER QUOTE: WEEDS ARE FLOWERS TOO”