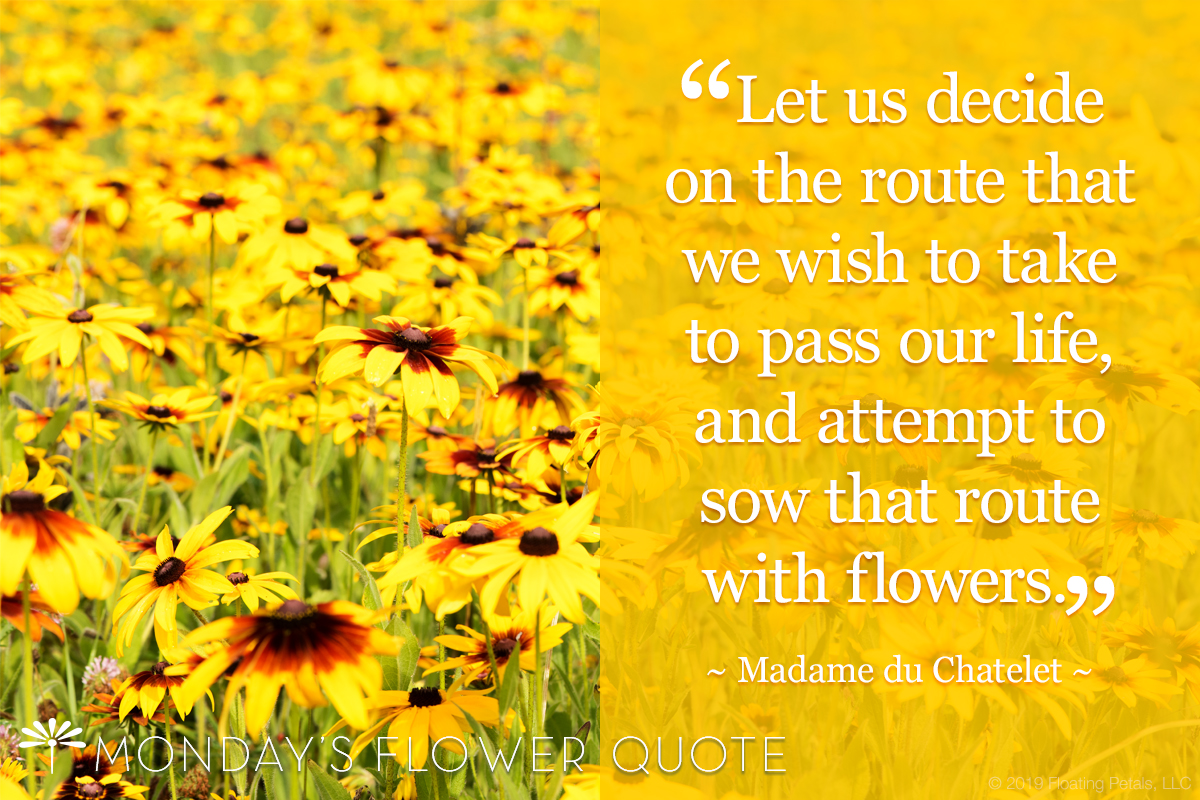 MY TWO CENTS
Let us decide on the route that we wish to take to pass our life, and attempt to sow that route with flowers… The first part is the contemplative part; the part that is about choosing what kind of person you want to be and what kind of life you want to live. It takes thought, effort and work. It means not living day to day, but consciously making a choice on who you want to be, so that life doesn’t pass you by. Once you have made that decision, you can starting sowing the seeds of the flowers you wish to grow along your route.

After reading this quote many times and contemplating it, it creates a vision for me to want to create a path that follows me with all sorts of lovely and vibrant blooms. I know there will be weeds, but I hope to work on pulling those weeds and replacing them with seeds of more blooms of kindness, caring and compassion. What about you?

ABOUT THE AUTHOR
Du Châtelet’s resume is incredibly impressive, let alone that she accomplished all of this as a woman in the 1700’s:

Gabrielle Émilie Le Tonnelier de Breteuil, Marquise du Châtelet (French pronunciation: [emili dy ʃɑtlɛ] (About this soundlisten); 17 December 1706 – 10 September 1749) was a French natural philosopher, mathematician, physicist, and author during the early 1730s until her untimely death due to childbirth in 1749. Her most recognized achievement is her translation of and commentary on Isaac Newton’s 1687 book ‘Principia’ containing basic laws of physics. The translation, published posthumously in 1759, is still considered the standard French translation today. Her commentary includes a profound contribution to Newtonian mechanics—the postulate of an additional conservation law for total energy, of which kinetic energy of motion is one element. This led to her conceptualization of energy as such, and to derive its quantitative relationships to the mass and velocity of an object.

Her philosophical magnum opus, ‘Institutions de Physique’ (Paris, 1740, first edition), or ‘Foundations of Physics’, circulated widely, generated heated debates, and was republished and translated into several other languages within two years of its original publication. She participated in the famous vis viva debate, concerning the best way to measure the force of a body and the best means of thinking about conservation principles. Posthumously, her ideas were heavily represented in the most famous text of the French Enlightenment, the ‘Encyclopédie of Denis Diderot’ and ‘Jean le Rond D’Alembert’, first published shortly after Du Châtelet’s death. Numerous biographies, books and plays have been written about her life and work in the two centuries since her death. In the early 21st century, her life and ideas have generated renewed interest. [1]